Dr. Persidis is President and co-founder of Biovista. He has also served as Senior Vice President at Upstate/Serologicals, Managing Director and President of RHeoGene, and Assistant Director-Medical School Technology Transfer Program – and Assistant Professor (Adjunct) at the Entrepreneurial Center of the Wharton School of Business at the University of Pennsylvania (1993-1997). Dr. Persidis is also a co-founder of Cellzome, in Heidelberg, Germany, and participated in the founding of Anadys, San Diego, CA. Dr. Persidis is a recipient of the Honeywell European Futurist Award (1986) and has published extensively on bio-business subjects. In 1997-2000 he authored the monthly “Industry Trends” column for the journal Nature Biotechnology. He has published more than 80 papers and book chapters, has lectured at Wharton, the Columbia Business School, George Washington University and the University of Auckland Business School, and is a frequent speaker at major international meetings. He also serves as an expert evaluator for the European Union and has served on the Business Development Committee of BIO. Dr. Persidis holds a First Class B.Sc. Degree in biological chemistry from Essex University, U.K. (1983-1986), and a Ph.D. in biochemistry from the University of Cambridge, U.K. (1986-1989), where he was also U.K. varsity ballroom dancing champion. 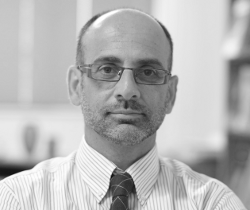 Andreas Persidis is the co-founder and CEO of Biovista Inc. Dr. Persidis has conducted research in the fields of machine learning and applied Artificial Intelligence and has led  the launch of multiple international research projects.

He has managed on behalf of the European Commission a roadmap study on systematic innovation, has served as an expert reviewer and evaluator for the European Commission and has advised the Greek and Austrian governments in the areas of IT and the life sciences. Since 2010 Dr. Persidis is the President of the Hellenic BioCluster (HBio). Currently he is a member of the EU HORIZON2020 expert advisory group on Innovation for SMEs and a member of the expert advisory group to the Greek Secretariat for Research and Technology.

Dr. Persidis has published extensively in international journals and is an invited speaker at forums on drug repositioning, innovation and export oriented high-tech companies.  He speaks Greek, English and French.

Graham Anthony is Biovista’s Chief Financial Officer & Chairman of its Advisory Board. In this role, Graham is involved in negotiating collaboration agreements, assessing new business opportunities, overseeing financial matters and coordinating Biovista’s response to investor interest. Graham was an early investor in Biovista and lead Biovista’s initial and subsequent financing rounds. Since 2000, both as an advisor and as a principal, Graham has assisted various firms in completing over 30 acquisitions, divestitures & fundraisings in a diverse range of industries. Recent investments include: TeamScreen, a business services firm using advanced web technologies to reduce costs & Greenlight Energy, a Wind Energy firm recently sold to BP. Graham has been a speaker on Mergers & Acquisitions and Benchmarking at various industry conferences. Early in his career, Graham founded, ran and sold two businesses: a small manufacturing firm and a regional newspaper. Graham received his MBA from the University of Virginia’s Darden School of Business, where he was awarded a Batten Fellowship. He holds a BA in English from the University of Virginia’s College of Arts & Sciences.

John L Warden, Jr. is Managing Director, Biovista, Inc. In this role, John is responsible for developing partnerships with pharma companies and the orphan disease community. John has over 20 years of experience in starting and growing companies. He began his career in telecom with a company he co-founded in New York City, which was absorbed by America Online where he worked to build out their domestic and international dial-up network. After leaving AOL, John joined GTA, a defense contractor seeking civilian applications for their portfolio of IP. He raised funds to further develop and create a market for the company’s chemical technologies. To date, GTA has returned a manyfold return of $80mm net to investors. Mr. Warden has a BA in mathematics from the University of Virginia.

Sandra Thomas is Biovista’s Chief Accounting Officer. In this role she is responsible for financial reporting and compliance. Previously, she was Chief Financial Officer of First Avenue Networks (NASDAQ: FRNS, now NASDAQ: FTWR), a fixed wireless telecommunications company. In this role, she was part of a three-person team that brought the company from bankruptcy to a NASDAQ listing. Formerly, Ms. Thomas was a co-founder and Chief Financial Officer of MuseumCompany.com where she was responsible for all aspects of finance, accounting and administration. Prior to MuseumCompany.com, she served as Senior Vice President of Finance of an Internet retailer. There she was part of a team that raised $145 million in an IPO and $131 million in private funding prior to the IPO. In addition, she established the finance, accounting, and human resources departments, as well as the operational controls for enterprise-wide order management and financial reporting systems. She also developed and implemented cash investment policies and programs for cash balances in excess of $170 million. Additionally Ms. Thomas has worked with a number of early stage technology and medical companies in an advisory role. A Certified Public Accountant, Ms. Thomas spent 14 years with PriceWaterhouseCoopers. She holds a B.B.A. from the College of William and Mary.

Christos Andronis has over 10 years experience as a Bioinformatics professional and more than 15 years experience as a Molecular Biology and Biochemistry researcher. From his current position as Head of Bioinformatics tools and services, he is in charge of the various activities related to the Information Extraction infrastructure and other data-driven aspects of the COSS platform. Prior to Biovista, Dr. Andronis worked at Protein Pathways, a Bioinformatics company in Los Angeles, CA, where he was actively involved in the design of Bioinformatics Applications, based on comparative genomics approaches. He has also worked as a post-doctoral fellow at UCLA, studying the biological clock of higher organisms. Dr. Andronis holds a PhD in Biochemistry/Molecular Biology and a M.Sc. in Biotechnology, both from Imperial College, University of London, UK. He has authored and peer-reviewed publications in international biomedical journals both in the fields of Biochemistry/Molecular Biology and Bioinformatics. Dr. Andronis has a long-standing interest in transforming experimental and textual data into knowledge useful to the biomedical research.

Vassilis Virvilis
Head of IT

Vassilis Virvilis received a Diploma degree in Physics from the University of Crete, Herculanum, Greece as well as a Ph.D. degree in Neural Networks from the University of Athens, Greece in co-operation with NCSR DEMOKRITOS in 1994 and 2001 respectively. During his doctoral he developed billnet a highly modular and efficient neural network simulator that has already been used to several real world problems along with research projects. He is an award winner of the software carpentry project for the design of a software configuration tool. His research interests include novel neural networks algorithm s’s complexity and their appliance in intelligent image and search based applications.

Dr Eftychia Lekka is a senior investigator in Drug Discovery at Biovista. Dr Lekka holds a PhD in Cancer Immunology and Immunotherapy (2010), a Master’s degree in Human Molecular Genetics (2003) from Imperial College London, UK and a Bachelor’s degree in Molecular Biology and Genetics (2002) from Royal Holloway, University of London, UK. Prior to joining Biovista, Dr Lekka worked as a research associate at the Cancer Immunology and Immunotherapy Center (CIIC) in Saint Savvas Cancer Hospital, Athens, mainly focusing on the development of peptide vaccine therapeutics for breast and prostate cancer. Furthermore, she has conducted research work in the field of genomic imprinting of fetal growth and development while in the Institute of Reproductive and Developmental Biology (IRDB) in Hammersmith Hospital, London. In addition to her research activities, Dr Lekka has prior expertise in prenatal genetics, particularly in the karyotypic detection of chromosomal abnormalities. Dr Lekka has participated in numerous biomedical conferences, where she has been awarded for her work, and has authored and peer-reviewed publications in international biomedical journals.